Posts in this blog:

As RRDTool wasn’t a perfect tool for storing sensor data, I tried a newer datastore: InfluxDB. It is a database designed specifically for time-series data, such as my tempereture readings here.

For visualizing that data, I used Grafana, The open platform for beautiful analytics and monitoring.

The ansible scripts for this post can be found at Github, namely the playbook tempreader-influxdb.yml.

Setting up InfluxDB is done in the ansible role influxdb. It will install the server from Influxdata repository, copy its configuration to place, start the server, add a database user with admin rights, create a database and open required ports in ufw firewall.

Variables for that role are given in tempreader-influxdb.yml playbook, and eventually in an ansible vault file:

I have it running on an external server, but you should be able to install it also on a Pi device. The only thing with Grafana is that if you use the cloud-version of Grafana, InfluxDB should be available for connections from the internet.

Sending the temperature readings from Pi to database is done with a simple python script that is executed periodically with cron.

roles/tempsensor-config/tasks/main.yml will setup a JSON file that describes all the available temperature reading sensors so that their 1-Wire ids will have also more meaningful tags in the readings:

roles/tempsensor-config/tasks/main.yml has Jinja2 magic to create a pretty JSON file from ansible data:

Sensor configuration is defined in group_vars/all/vars.yml:

roles/tempreader-influxdb/tasks/main.yml sets up the temperature reading script: it installs python and required libraries, copies the script, sets up the cron and runs it for the first time.

Finally, the interesting part roles/tempreader-influxdb/templates/readtemp-influxdb.py.j2 isn’t after all that special. It will read temperature values with W1ThermSensor and send data to InfluxDB with InfluxDBClient.

Tags for each reading are used from the JSON configuration file sensors.json.

InfluxDB can be queried manually with an SQL-like syntax:

For data visualization, Grafana was easy to set up. I used the hosted grafana as it was free for single user. Grafana can also be installed to your own server.

So there are no ansible scripts for this part. After creating a hosted grafana instance, you can follow the good instructions Using InfluxDB in Grafana. From the main points listed in Grafana’s Home Dashboard, important ones are adding a datasource and creating a dashboard.

For me, the dashboard configuration wasn’t intuitive at first. After clicking new dashboard and then “Graph”, you’ll end up with a blank panel and no hints on how to go forward. The trick is to click “Panel title” and then “Edit”. Then configure the query as follows: 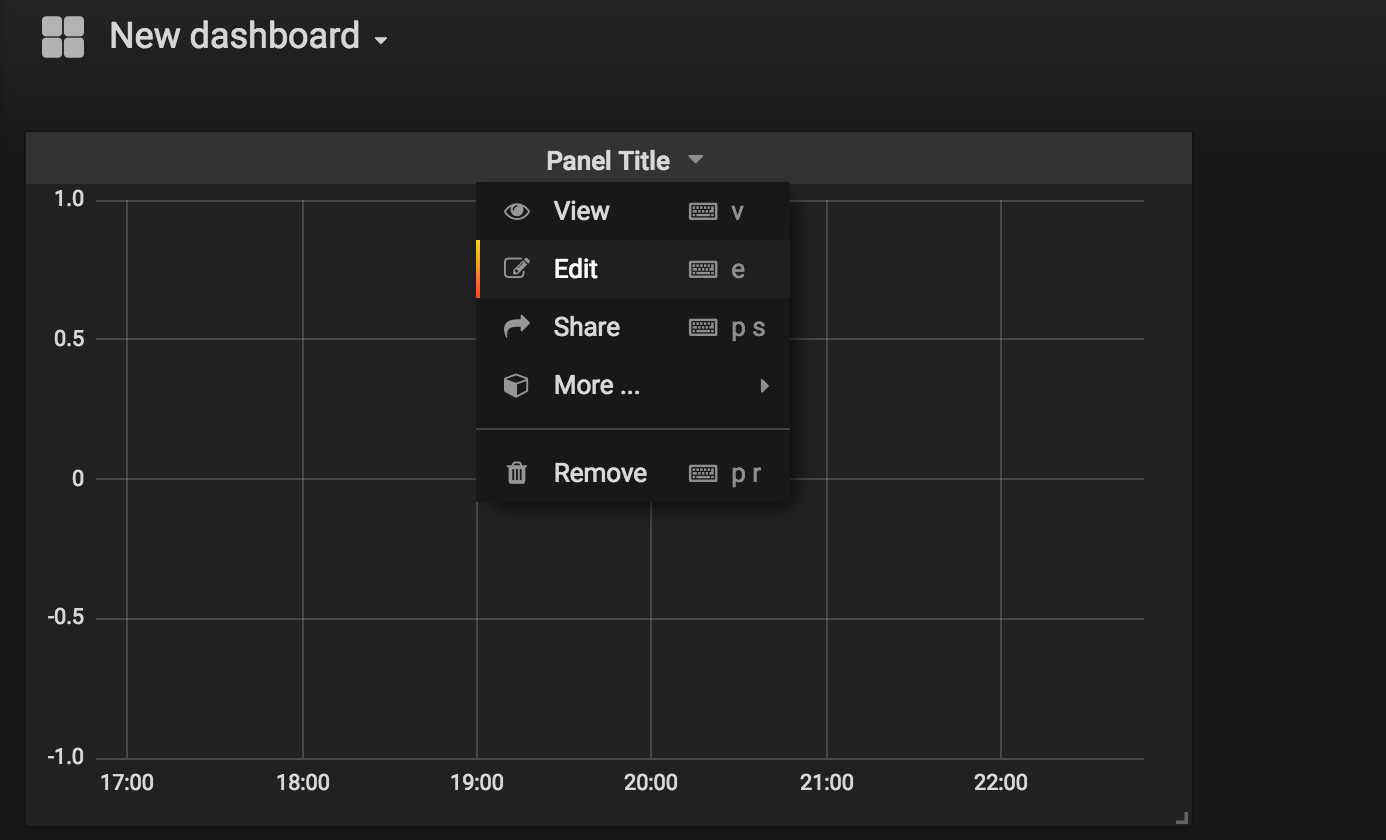 For the query under “Metrics” tab, set up like this: 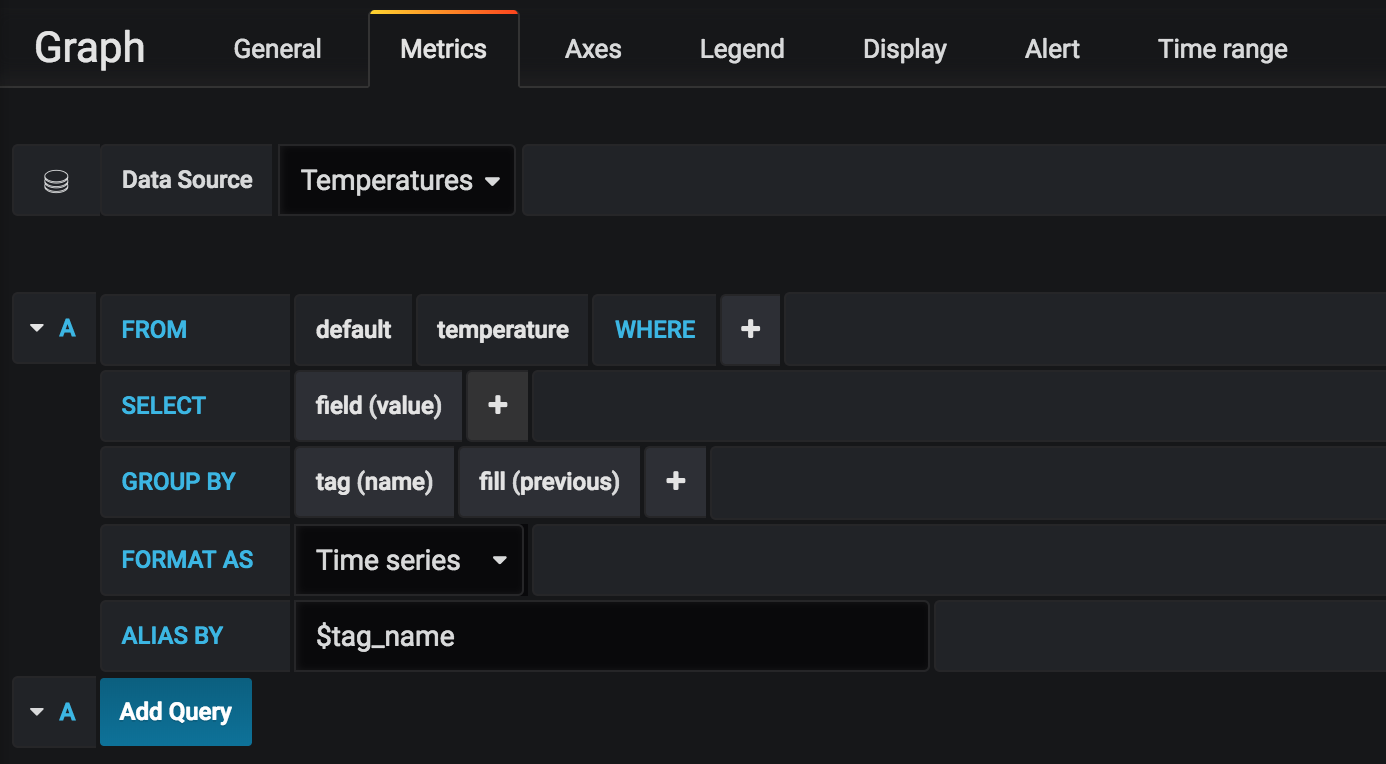 Here the GROUP BY clause will separate the data into one graph per sensor. tag(name) is the best tag for grouping as it will show up in the legend also. fill(previous) will connect the data points in the graph, and selecting previous will make “current” to show the latest data point in the legend.

And you’ll have a beautiful graph of your temperature readings! 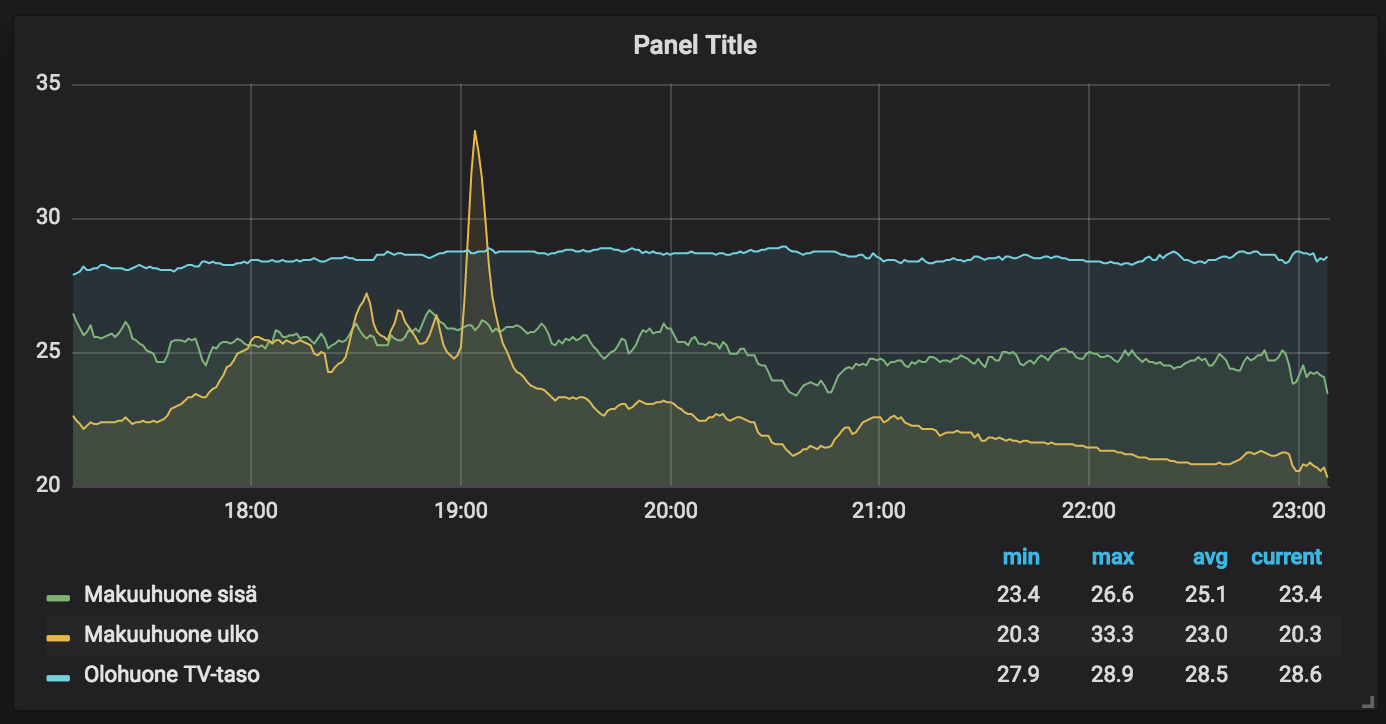 While having our bathroom and sauna renovated, I wanted to be able to listen to music in sauna. Getting a speaker and its cable in place was straightforward, but after that the setup became more complex. Some amplifier with bluetooth audio or Spotify streaming would have been simple, but for bluetooth you’d still need the music somewhere, and I don’t want a Spotify subscription.

And of course you’d want the same music to play inside and outside the sauna. So, I had an excuse to build multi-room audio with inexpensive components for two rooms.

Raspberry Pis were an easy choice to build around, so everything has to work in Raspbian Linux.

Music Player Daemon (MPD) is used for playing music, it has a local playlist that can be changed with clients so that the device can keep playing music even if no controllers are connected to it. If you do have that Spotify subscription, Mopidy is a MPD compatible server with Spotify support through extensions.

Soundirok is a MPD client for iOS devices. It supports also loading cover images with HTTP, so I have nginx set up for that purpose also. On macOS, I use ncmpcpp.

Multi-room audio is achieved with Snapcast. Unfortunately it doesn’t have an iOS client software available, so controlling different rooms’ volumes separately is not easily possible at the moment.

ALSA is used for controlling the sound cards. It’s not that simple to configure, but then again, it’s quite flexible when you do get the configuration in place.

For sorting out the music library, I use beets, but explaining that pipeline would be a topic for another blog post. Here I assume that the music just appears to the correct place.

I have devices in two rooms: living room and sauna. rpi-olohuone in living room is the server device rpi-kph in sauna is a client device. 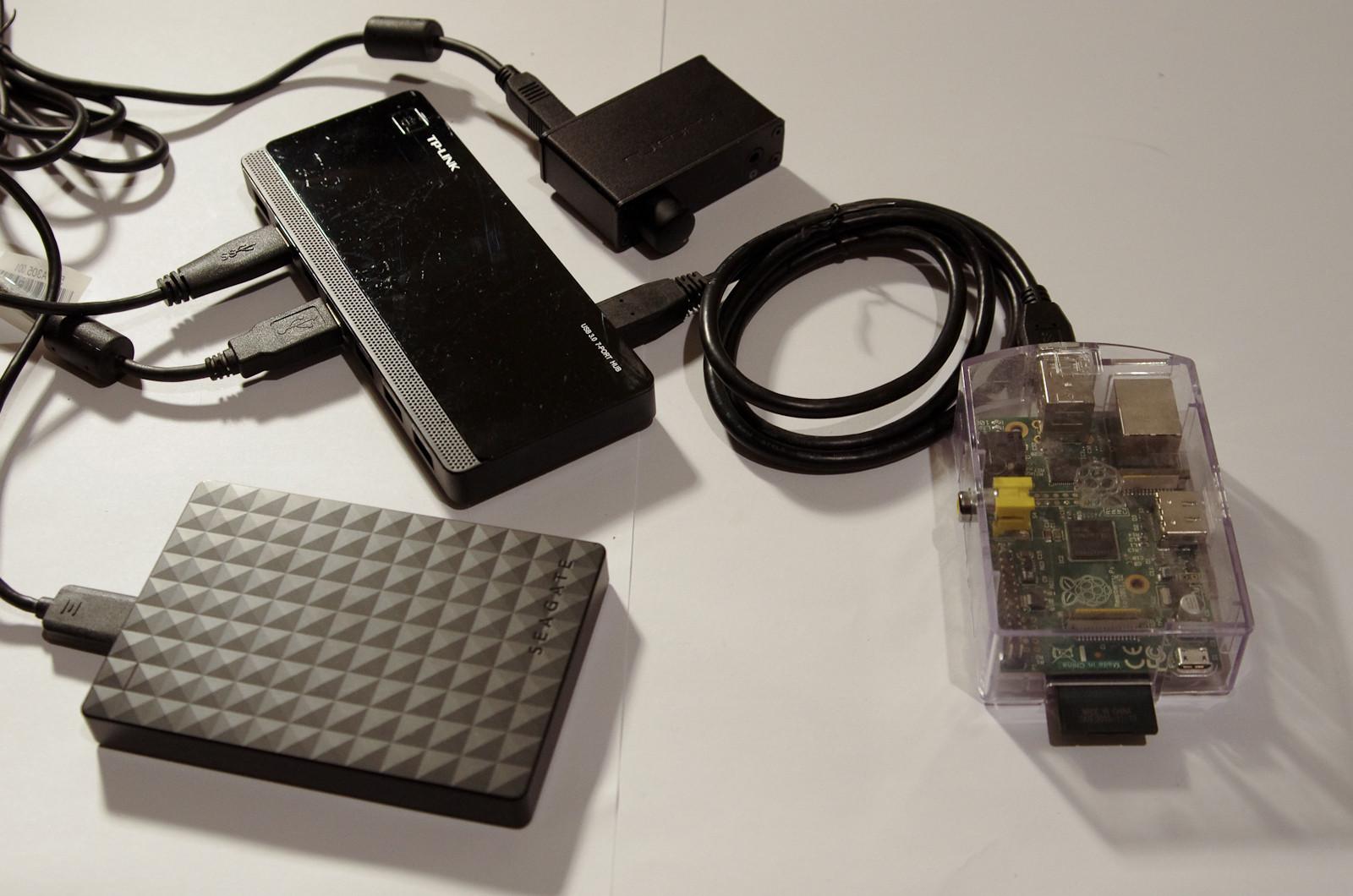 The server setup has Raspberry Pi model 1 B, but the actual model doesn’t really matter as everything could also be done with a Pi Zero also. Music is played with NuForce μDAC-2 USB sound card (aka DAC). Files are stored in a Seagate HDD.

μDAC and HDD are powered through USB, and at least the HDD requires more power than what Raspberry is able to give, so I have a powered TP-Link USB hub in the middle. 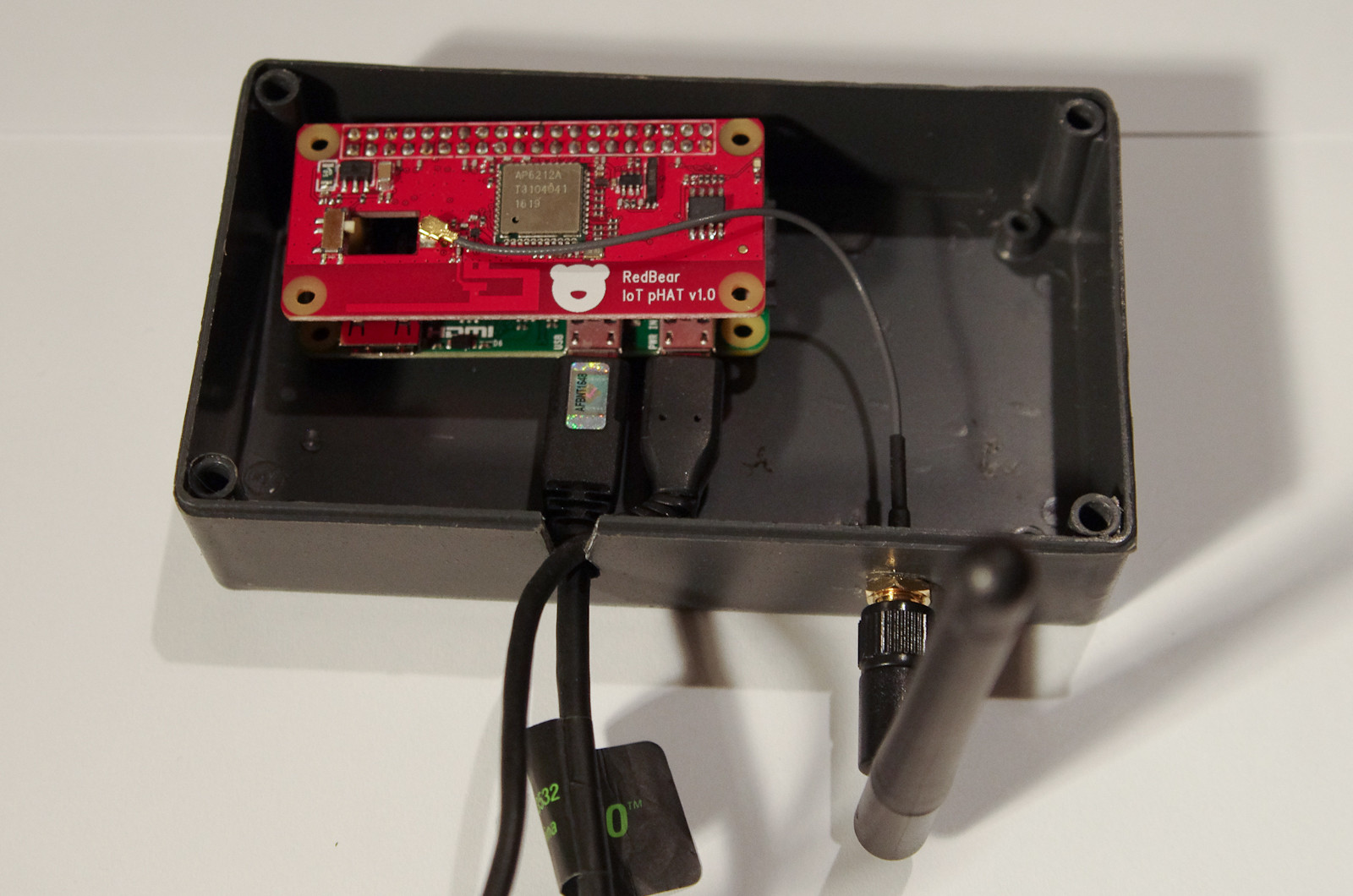 Sauna client is a Raspberry Pi Zero with a RedBear IoT pHAT for WiFi connectivity and an external antenna for added range. The case was not optimal, but does its job.

Adding pHAT required soldering both on the Pi Zero and on the pHAT itself. There is also a model Pi Zero W with WiFi included, and with that you don’t need the pHAT at all.

Selecting the sound card required a bit more thought as I had to have a DAC and amplifier both. After some googling, I ended up with Topping VX1, an USB-DAC and amplifier in the same device, which should also work in Linux!

Configuration is done with Ansible and is available in my raspberry-ansible repo. Everything described here is included in two playbooks: bootstrap.yml and music.yml

Setting up the external HDD is quite simple with Ansible, you need only the mount module.

You can find out which device the external hdd is with lsblk and blkid (here /dev/sda1):

group_vars/pi/vault.yml (file with secret variables, this can be edited with ansible-vault edit and the file in my github repo cannot be used, you’ll have to overwrite it with your own):

Setting up the RedBear IoT pHAT is also really simple, Linux kernel notices the device itself and you just have to setup the correct WiFi network parameters.

ALSA configuration was probably the hardest part to get working, especially with the Topping VX1 sound card.

There is only one speaker in sauna, so I’d want both the channels to be mixed into mono. Luckily there was a snippet for this. sysdefault:VX1 comes from aplay -L output, chosen with trial and error:

The task configures also the Raspberry Pi onboard sound card (snd_bcm2835) into use, even though neither of these current devices use it. The installed package alsa-utils can be used to test the configuration:

should output noise on both channels in turns (and from the same speaker in sauna).

Snapcast has to be configured so that music player, MPD sends audio to Snapcast server, which will forward the audio to all connected clients. In order to get the audio synchronized, also the device with MPD has to play music through Snapcast client.

Snapcast server is not available from Debian or Raspbian Aptitude repos, but luckily an Aptitude package is available in Github. The built package is different for different processor families, _armhf is the correct for Raspberry Pi, others are listed in the releases page.

Snapcast server requires ports 1704 and 1705 to be open, but otherwise the default configuration doesn’t need any adjustments.

Snapcast client is installed from the same place as server. It doesn’t require that much configuration either, only the server IP address on both clients, and additionally the custom sound card makemono on rpi-kph (it’s supposed to be the default, don’t know why it didn’t work with snapclient without specifying it like this).

Troubleshooting Snapcast server can be started with systemctl, working output is something like this:

And Snapcast client the same way:

mpc is a command-line client for MPD. It is not used in these Ansible scripts, but comes in very handy when you add music to the library and the MPD database has to be updated.

MPD configuration is fairly default. audio_output is the interesting part: MPD plays music to /tmp/snapfifo stream, from where the Snapcast server reads it.

Variables are also straightforward, define this device as MPD server, and specify where the music is located.

MPD database can be updated with mpc:

and queried, queued and played:

Although you should definitely use some other client such as Soundirok for iOS or ncmpcpp for macOS/Linux.

Troubleshooting can be started with systemctl again:

For Soundirok, MPD server has to be added under Settings → Devices: 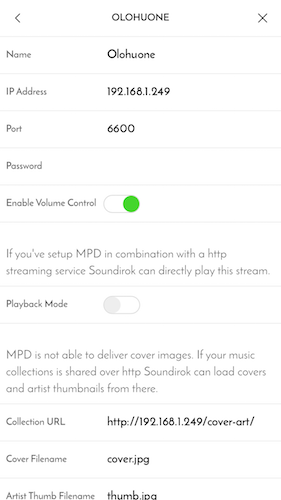 If I remember correctly, Soundirok should start synchronizing the MPD music library to the client. It can be done manually by clicking the top bar device name (“Olohuone” in my case) and selecting Refresh Soundirok database.

I was planning that the sauna devices could be turned on and off with the light switch, and there are power sockets to enable this. However, even though Topping VX1 features include Auto turn on / turn off synchronously with your PC (Only in USB mode), I haven’t figured out how to do this. Might be that this only works in Windows.

When the devices are powered on (or get electricity), I still have to press a button in VX1 to wake it up. It would be easier if this wasn’t necessary as the device isn’t in a very easily accessible place. As a workaround, I’ve had it turned on most of the time.

Other than that, the setup works really well. 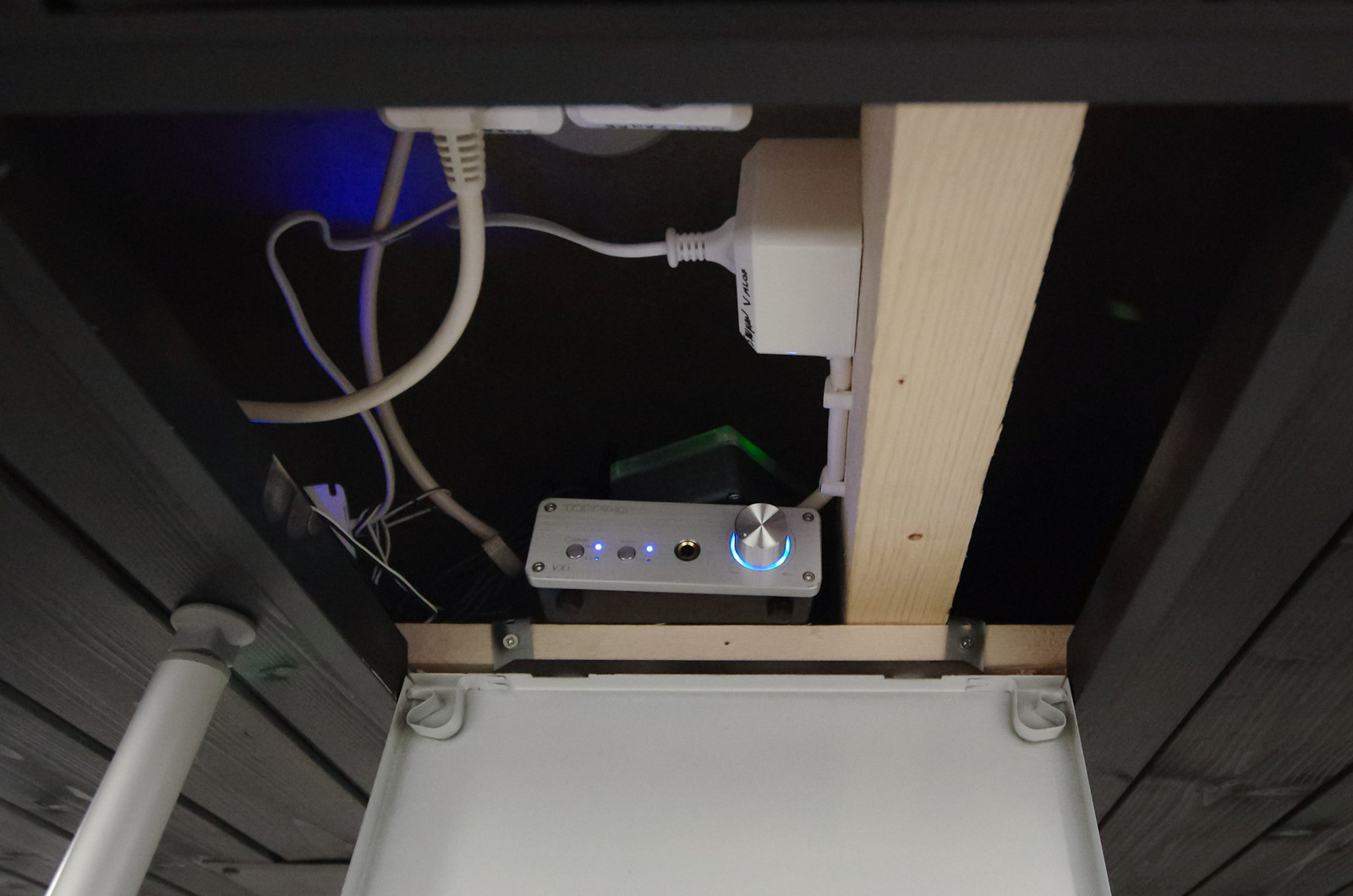 Sauna devices are in the bathroom ceiling. 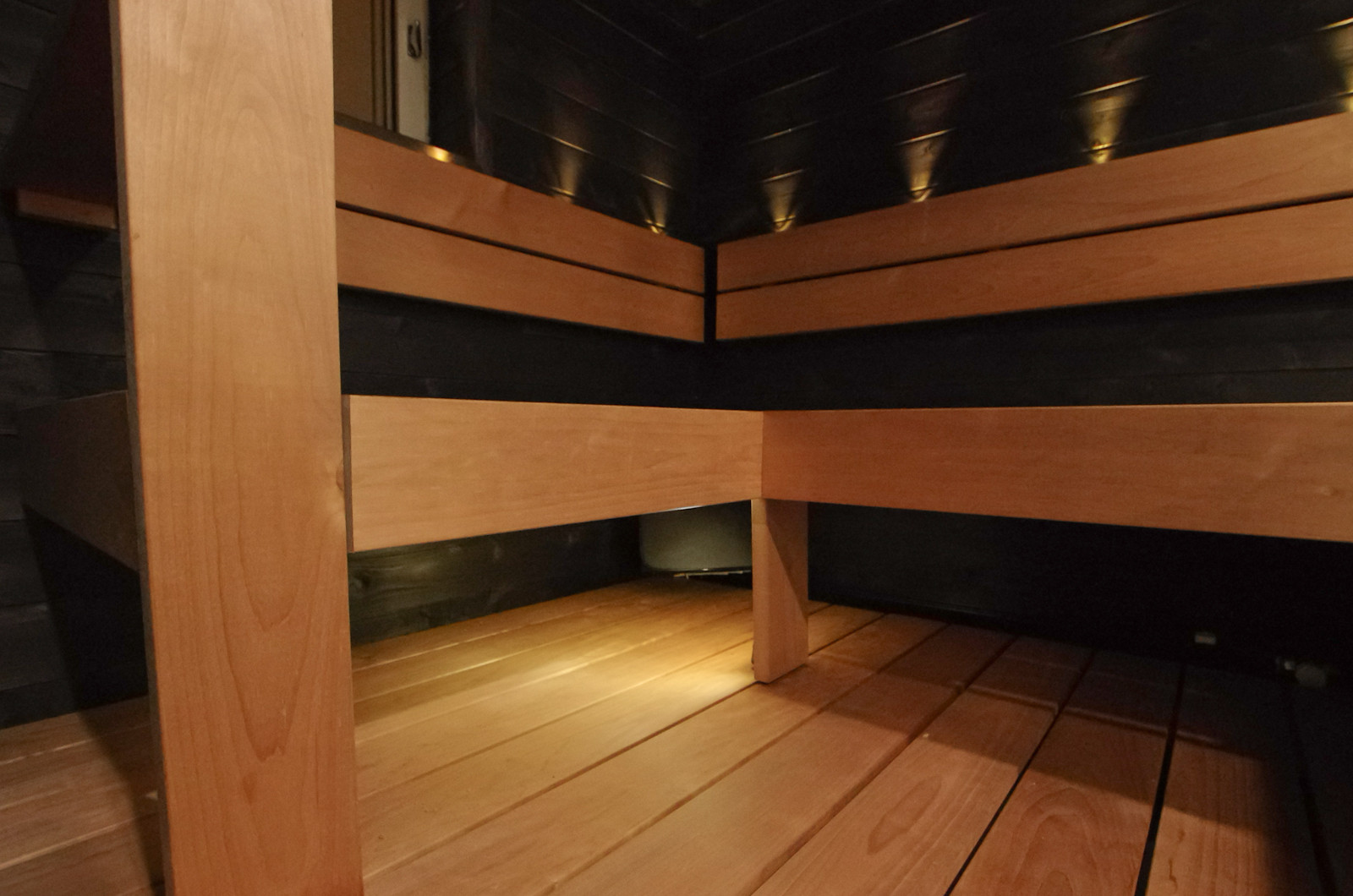 Speaker is under the sauna benches. The speaker is a weather-proof Bower & Wilkins AM-1 and it sounds really good.