RRDtool as a time series datastore for sensor data

RRDtool is a high performance data logging and graphing system for time series data. It doesn’t have a query language such as SQL, nor is it a NoSQL document store. Instead, you can store floating point numbers and accompanying timestamps there, and configure some aggregates.

RRD in the name comes from Round Robin Database, which means that the size of the database is decided when it is created, and once filled completely, the values are overwritten from the beginning. RRDtool has accompanying software for graphing the data called rrdgraph.

Running the Ansible playbook tempreader-rrdtool.yml installs a python script that reads all connected 1-Wire temperature sensors to RRDtool databases (one file for each sensor, files are created if they don’t exist). It also adds the temperature reading to be executed every five minutes as a cron job.

After which the Raspberry’s pi-user’s home directory should have files like these and a cron job:

The first two files are RRDtool databases for temperature sensors with ids 0000075f24dc and 0000075f5202. current.png is a graph of last day’s temperatures from each sensor generated with RRDtool’s graphing function. And readtemp-rrd.py is the python script.

Crontab syntax means that the command /usr/bin/python /home/pi/readtemp-rrd.py is run every five minutes.

Setting up a RRDtool database for time series data

Diving into readtemp-rrd.py, first imports show that we are using external library rrdtool by Christian Kröger for using RRDtool from python.

The setting DATABASE_PATH defines where the database files are stored. Each sensor has its own database file.

create_rrd_unless_exists creates an RRDtool database file unless one exists already using rrdcreate (or its python bindings). The data definition syntax is not simple, but first --step tells how frequently data is expected, 300 seconds being once every five minutes.

Then a data source (DS) called temp of type GAUGE is created. Gauges are for data that is just values which can increase or decrease over time, such as temperature. Next number is the heartbeat: how many seconds may pass without a new value before the data source is regarded as unknown, here 900 for 15 minutes. -100 is the minimum and 100 the maximum value for this data source.

RRA stands for round robin archive which is used for storing the read data. Data is run through a consolidation function (CF), here AVERAGE. Average is taken over 10 minutes (2 data points) and database has space for 10 years: 525600 of these 10 minute average values, if my math is correct. As the name suggests, when this time has passed, the database values will be overwritten from the beginning. This 10-year database for one sensor takes 4.1MB of space, so Raspberry wouldn’t choke even if there were more than two sensors.

Current stable RRDtool version 1.6.0 supports giving these time arguments with easier syntax so that you don’t have to calculate for example how many 10-minute periods there are in 10 years. Unfortunately Raspbian Jessie has version 1.4.8 which doesn’t.

Code loops through all the sensors, creates a RRDtool database for each sensor unless it exists, reads the temperature value and writes it to the database and prints it to standard output as well.

Writing to database uses rrdupdate, which has a relatively easy syntax: first parameter is a timestamp (N for now), following ones are values. %.2f is python syntax for formatting a decimal number as a string with two decimals.

RRDtool has functionality for generating graphs from databases included with command rrdgraph. Unfortunately its syntax is even more complex than database creation’s.

But first, the following static variables are used for configuring graph generation:

Graph configuration has two main elements here: definitions (starting with DEF) and lines (starting with LINE1 here). Definitions specify the data that is used for graphing. Here temp:AVERAGE from each sensor’s database file is redefined as the sensor’s id. Then a line is drawn for each of these sensors with different color, and the line is labeled with possible name for the sensor id.

Last read value from each sensor is also printed to the graph. Here I simply couldn’t get the texts to be right-justified and stay under the graph area. COMMENT: \l is required so that the prints would start from a new line, last value is read from sensor.id data, and it’s printed after a sensor name.

All this outputs a temperature graph for previous 24 hours: 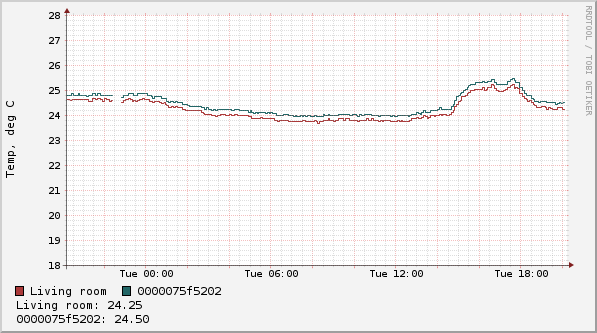 After all, RRDtool does the job is it designed to do. The database file is created before any data is inserted, and it stays the same size no matter how much data is inserted. This could be beneficial for systems that have limited disk sizes: for example if RRDtool is used as a local datastore in sensors with unreliable connectivity. That way measurements can be done even if there is no connection to the master node, and data can be transferred afterwards.

Transferring RRDtool data between nodes would require another blog post. rrdxport supports exporting XML or JSON with specified time intervals, so that could be used.

Generating graphs is good for simple use cases, but ideally one would want an interactive, zoomable graph with tunable parameters in browser. I spent a lot of time to get the chart above, and am not that satisfied with the result.